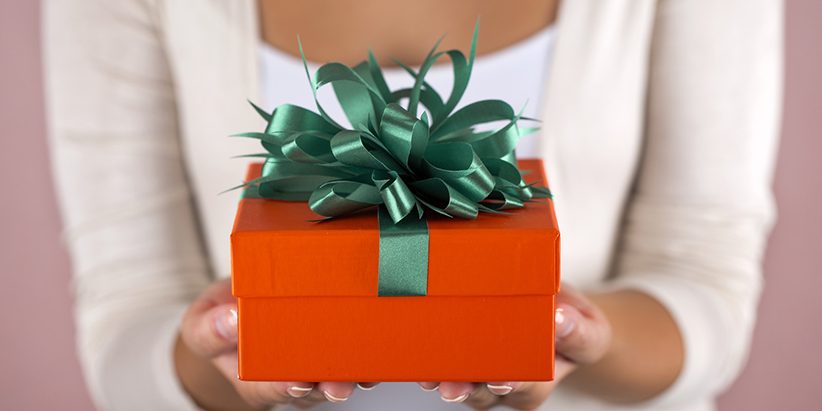 This article about corporate gift products is reposted from Meetings Net. Here is the link to the original article.

The annual corporate gift-giving report released today by the Advertising Specialty Institute (ASI) shows companies that are rewarding employees with cash or gifts this holiday season are spending an average of $44, up nearly 16% from 2014.

Further, companies thanking clients plan to give gifts averaging $48, up 9% from 2014. Food or beverages are the most popular items for customers and prospects, followed by useful office items like pens, calendars and power banks.

According to ASI’s 7th annual Corporate Gift Spending Report, nearly one-quarter of all companies giving gifts to employees told ASI they will spend over $100 on each employee gift this year, versus 18% in 2014.

Once again, the leading employee gifts are gift cards and cash bonuses, followed by food and beverages, and apparel.

“What struck me the most about the 2015 results is that companies are spending more overall on employee gifts than on client gifts, most likely in an effort to retain top talent in a robust job market when employees have more choices,” said Nate Kucsma, ASI’s marketing research director.

The latest job figures show U.S. hiring swelled in October by the largest amount all year, and unemployment dropped to 5% – its lowest point since April 2008, just a few months after the Great Recession began, according to the Associated Press.

ASI results also show that nearly half (46%) of all responding companies report that 100% of the gifts they give out this season, to both employees and customers and prospects, will have their company’s logo on them.

While the actual number of client gifts has gone down, the total amount companies are spending on those gifts has gone up. Kucsma said this shift is likely the result of companies being more selective, with almost half of the surveyed companies giving higher-priced gifts to higher-value clients.

The primary goal of giving gifts to customers and prospects is to express appreciation, followed by relationship building, the report found. As for recipients, when asked what word describes how they feel after getting a corporate gift, the majority said “appreciated,” followed by “grateful” and “valued.”

When questioned about the best corporate gift they ever received, respondents cited standards like fruit baskets, popcorn tins and engraved pens as well as such items as a branded umbrella, laptop sleeve, reciprocating saw, steaks, movie passes, bourbon truffles, a spa day, weekend in New York City, iPads and activity trackers. “A briefcase with the logo and my name embroidered on it – I still treasure it,” one respondent told ASI.

Kucsma said a number of gift categories, including tech and apparel, are poised for a strong year. “A few years ago, there was no such thing as a mobile power bank – but now they’re becoming ubiquitous,” Kucsma said. “In fact, according to a new research study ASI is releasing in December, power banks are now one of the most sought-after products from the under 45 demographic.”

For its annual corporate gift products gift-giving report, ASI conducted a nationwide survey of respondents from a cross-section of industries who were screened to have a personal role in decisions about procuring corporate gifts for either employees or clients/prospects.

Discover our dedicated service & memorable selections of corporate gift products and souvenir ideas for corporate events. Corporate gift giving on time, as ordered, sure to delight.  Contact us to start a personalized proposal or check out our online shop  for gourmet hot sauces, seasonings and other Caribbean treats and Caribbean bath and body items.

Liked this article? Join the Crew and Start the Journey! Connect with Us for Corporate News, Events, Lifestyle, and all things Caribbean by joining our Newsletter – Click Here to Join or find us on Facebook or Instagram.

Sorry. No data so far.