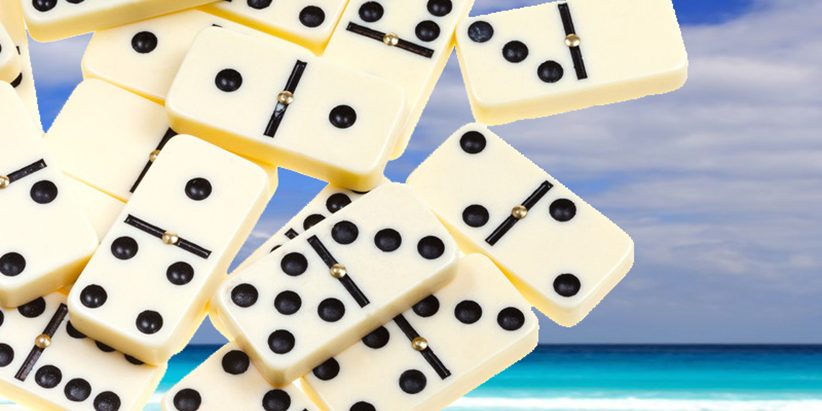 Dominoes is a great corporate gifts ideas for clients.  Dominoes is a quintessential game played throughout the Caribbean. Each island has it’s own rules and traditions. For example, in Cuba it is popular to play with Double 9 Dominoes.

In Puerto Rico, we play with the traditional Double 6. “El Domino” is for Puerto Ricans not simply a game of strategy or just a pastime, but also an activity around which community relationships are built and sustained. Dominoes are played in all circles in the Puerto Rican society by people of all ages. It is primarily known as a family game, since it is learned by children from their fathers, uncles, and grandfathers. In Dominoes, it is interesting that one of the team strategies summarizes a community theme: “The best offensive strategy is to defend your partner.” Around the domino table, the players & families interact – cooking, playing music together and just mingling; therefore dominoes becomes a social-familiar event, almost a ritual, in which all become refreshed and spiritually recharged.

This is a great gift to tie in a corporate message about teamwork and partnership and fun for your corporate gifts ideas for clients.  We have many dominoes sets available in a range of designs and budgets.

Players: Two or three play each by themselves. Four, two against two as partners, facing each other.

The Deal: All bones are shuffled face down and each player draws 7 bones. In 2 or 3 player games the remaining bones are stocked together on the side and form the bone yard. Each player keeps his

dominoes secret to himself only.

The Game: In the first game of a match, the player who holds the double 6 starts the game. In 2 or 3 player games if the double 6 wasn’t drawn, then the highest double starts the game. In subsequent games in the same match, the winner player of the previous game starts the game with any bone he wants, a double or otherwise. Once the first domino is played, the next player to the opener’s RIGHT plays a bone to the layout, draws or passes, and the game continues counter-clockwise. In Puerto Rico, due to our Spanish origins, most games are played to the right (counter-clockwise), instead of to the left as in most other games. If a player can’t legally play a bone, (in 2 or 3 player games) he must draw from the bone yard until he can play. If the bone yard is exhausted, (or in 4 player games) he must pass. If a player has a bone on hand that can be played legally, he can’t draw from the bone yard, and must play from his/her hand. Drawing from the bone yard in the hope of finding a more strategically sound play is illegal and considered “Trampa!” When

a player passes, it is customary to knock one of his bones on the table as a signal that he is passing. Alternately he can signal the pass by saying the word “Paso” (Pass).

The End: The game ends when one player goes plays his last bone or the game is blocked (all players have consecutively passed). The player whose dominoes, or in the case of a blocked game (“trancado”) the player/team with the lightest hand, wins the hand.

hands of all the players (including his partner, and his own in a blocked game).

Object of the game:

A Domino Match is made of several individual games, and the first player/team to score the agreed in advance score wins the match. Typical match scores are 100 or 200 points (“Doscientos“).

“Mano” – A single game. A dominoes match is made of several games (manos).

“Chuchazo” – When the winning bone is the double-blank (“la Chucha!”) .

“Trancado” – A blocked game. The last bone played before the game got blocked is called the “Tranque“.

“Ahorcado” – A hanged double. A double that can no longer be played because all the other 6 dominoes in that suit have been played.

“Puerta” – It’s the last bone remaining for a particular number. i.e. When on one end of the layout you can only play a 3, and there is only one 3 left, the player holding that 3 is said to have “la Puerta del 3“

Discover our dedicated service & memorable selections of Corporate Gifts and corporate gifts ideas for clients. Corporate gift giving on time, as ordered, sure to delight.  Contact us to start a personalized proposal or check out our Online Shop  for gourmet hot sauces, seasonings and other Caribbean treats and Caribbean bath and body items.

Liked this article? Join the Crew and Start the Journey! Connect with Us for Corporate News, Events, Lifestyle, and all things Caribbean by joining our Newsletter – Click Here to Join or find us on Facebook or Instagram.

Sorry. No data so far.